Just added to your cart

Are You Staying Hydrated?

You can drink water all day long, but you’ll still find yourself dehydrated if your body can’t retain that water. It sounds confusing, but it’s possible! According to the chart below, published in the American Journal of Clinical Nutrition, our bodies don’t retain water as well as they do for milk, juice, and even soda. Because staying hydrated is key to good balance and health, we want to focus on fluids­ that’ll slowly travel and exit through the body. 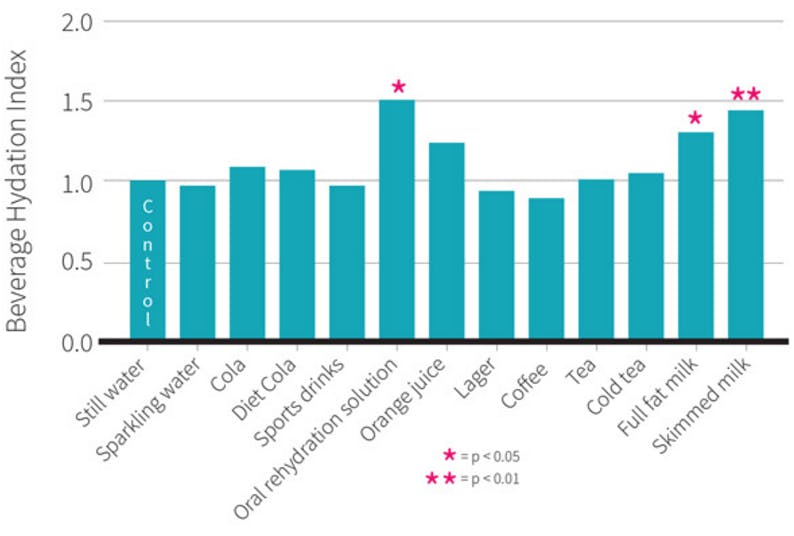 The amount of fluids consumed and contents of a beverage will determine the speed of absorption and excretion. In the study, pictured above, researchers compared some of the most commonly consumed drinks. 72 participants consumed one liter of each of the beverages listed in the diagram. After two hours, urine was collected, measured, and compared with the results of plain water. They called this the beverage hydration index (BHI). The illustrated index compares how long each drink was retained in the body for two hours after it was consumed. The higher the index, the more fluid is retained in the body.

Throughout the study, they found that some drinks had better hydrating properties than water. Not surprisingly, oral rehydration solutions, which are used to prevent and treat dehydration, scored the highest BHI due to their high electrolyte content. The surprise came with the results for skim milk, whole milk, and orange juice. Despite containing more calories and slowing gastric emptying, they still scored high on the BHI. In addition, beer, coffee and tea – beverages commonly thought to be dehydrating – had scores that weren’t too far off from the BHI of water.

The takeaway from this study is that most beverages are very similar to water in how they hydrate our bodies. Some fluids take longer to leave the body, which is important for sports performance and exercise, but most will contribute to daily fluid requirements. However, that doesn’t make sugar-laden drinks healthy!

From a health perspective, we must consider total calorie consumption through fluids versus that from whole foods, which provide other health benefits. Some of these benefits include helping your body maintain a healthy water balance. While drinking our calories is not necessarily the most healthful way to get nutrients, this study shows that hydration is just as important and that there are multiple ways to stay hydrated.

* Percent Daily Values are based on a 2,000 calorie diet. Your daily values may be higher or lower depending on your calorie needs.